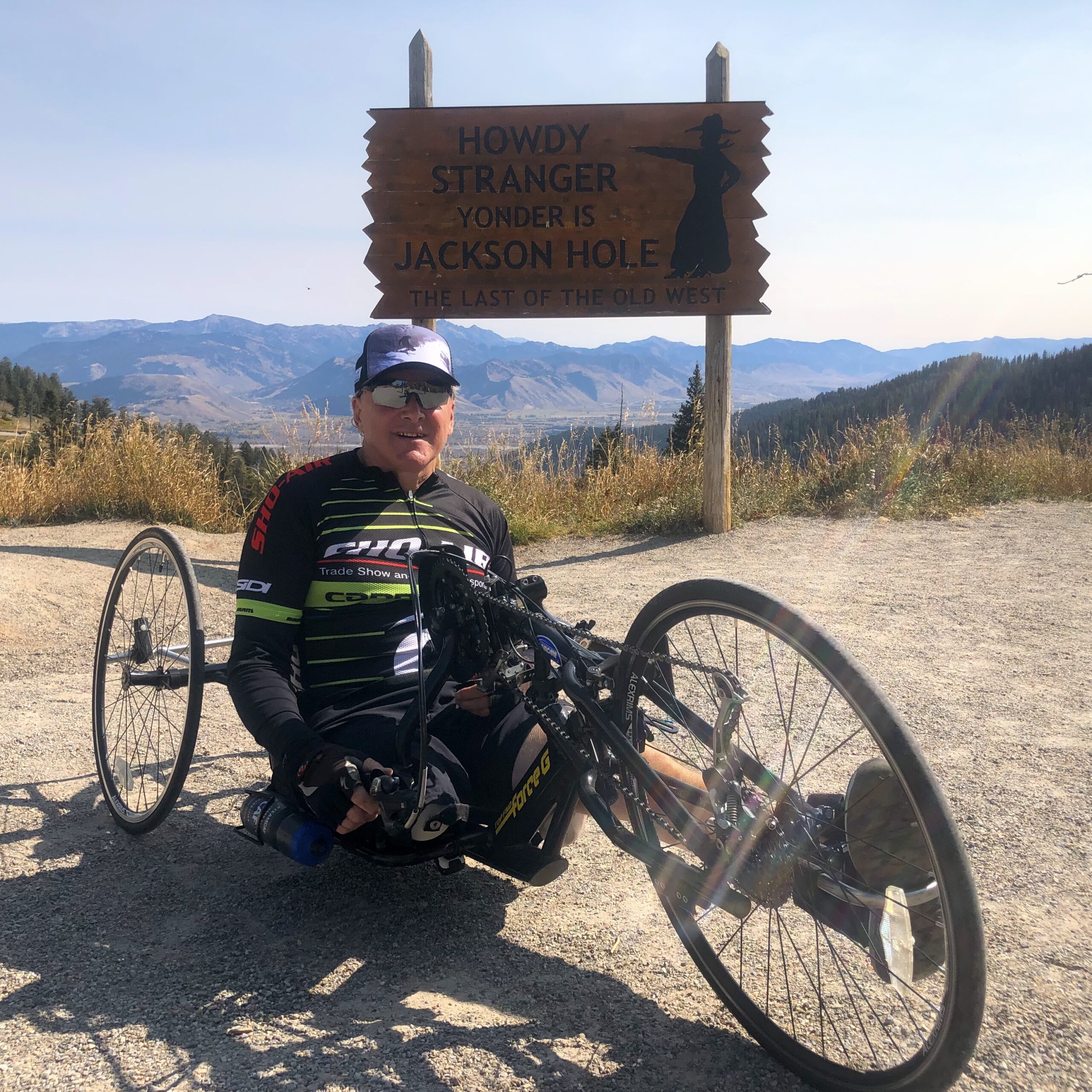 John Zendler was born and raised in Michigan. His love of triathlons led him to become a Chiropractor with an emphasis in sports and orthopedics. John practiced for nine years in Michigan and Ohio before moving to Jackson Hole in 1995 where he continues to practice. John and his wife Deborah moved to Jackson Hole to embrace the mountain lifestyle: hiking, biking and skiing in the Tetons.

Life could not have been better until July of 2016 when John had to have an above-the-knee leg amputation due to complications of a failed knee replacement surgery. After losing his right leg, John felt his previous athletic lifestyle and experiences in the mountains were no longer accessible. Life turned around for John when Deborah’s unceasing dedication and persistence to get John back outside and active again lead to the purchase of an adaptive hand cycle.

Hand cycling lead to three-track downhill skiing the next winter. It was at this time John first learned about TAS through its past co-founder and director Kurt Henry and became a beneficiary of the Adaptive Ski Program at JHMR.

Through this difficult ordeal John has experienced first hand how becoming disabled can lead to the inability to pursue and reach one’s goals and dreams in life. It is this invaluable experience than John brings to TAS to assist in accomplishing its mission to make Jackson Hole and other like-minded athletic communities more physically accessible to those living with a disability. 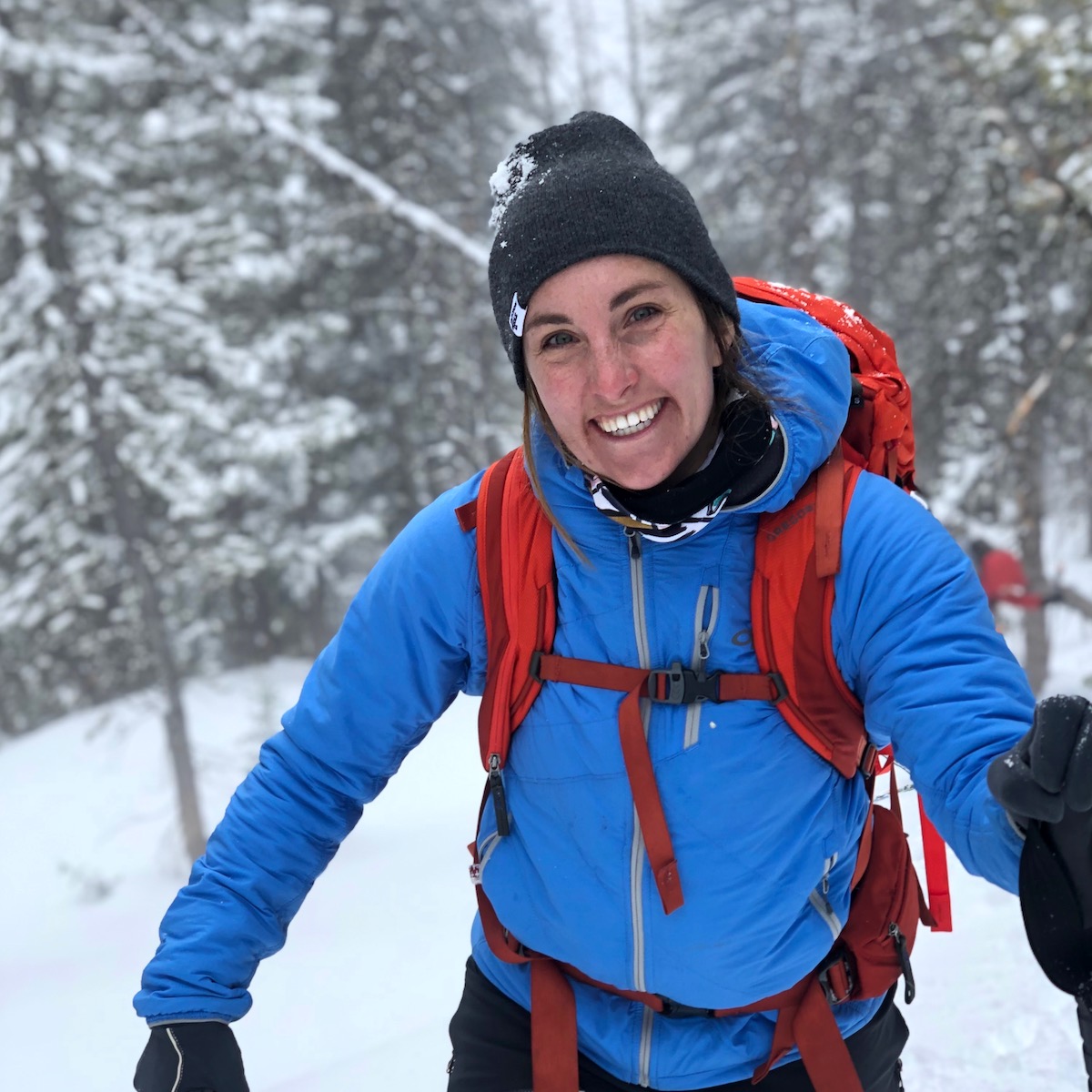 Wendy was born and raised in New Hampshire. Her passions drew her West in 2009, and she began working for wilderness therapy and adaptive sports organizations from British Colombia to Colorado, Utah, Maine, Vermont and Peru. Most recently, Wendy was involved with the University of Utah’s Tetradapt program focused on using innovative technology to improve adaptive sport participation for people with complex disabilities.

She eventually came to Jackson for her dream job as a mountain town physical therapist where she works with adults with neurological conditions as well as pediatrics. Wendy finds balance by adventuring outside with her husband, doggo and son Luca. She helps individuals with disabilities to do the same through involvement with TAS. 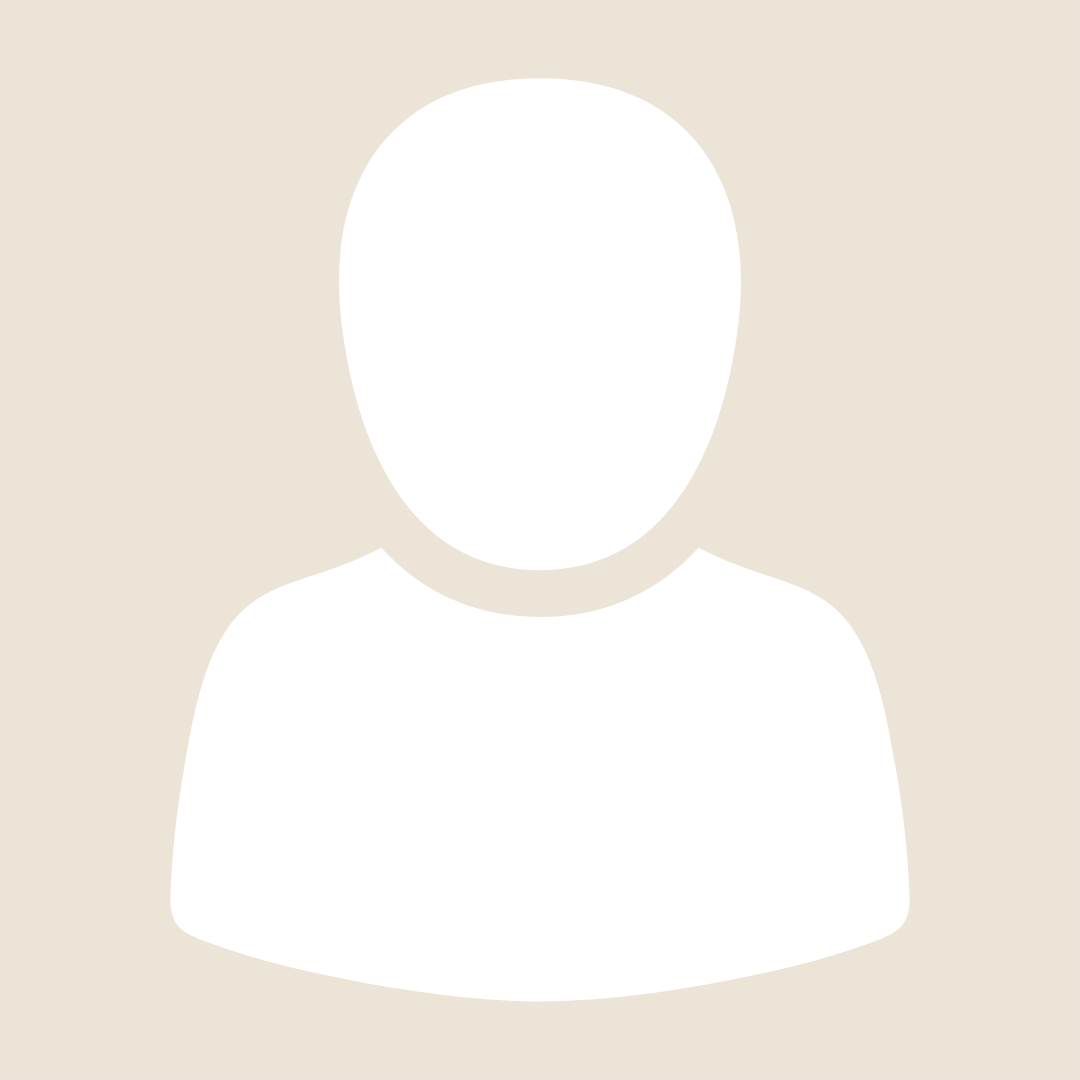 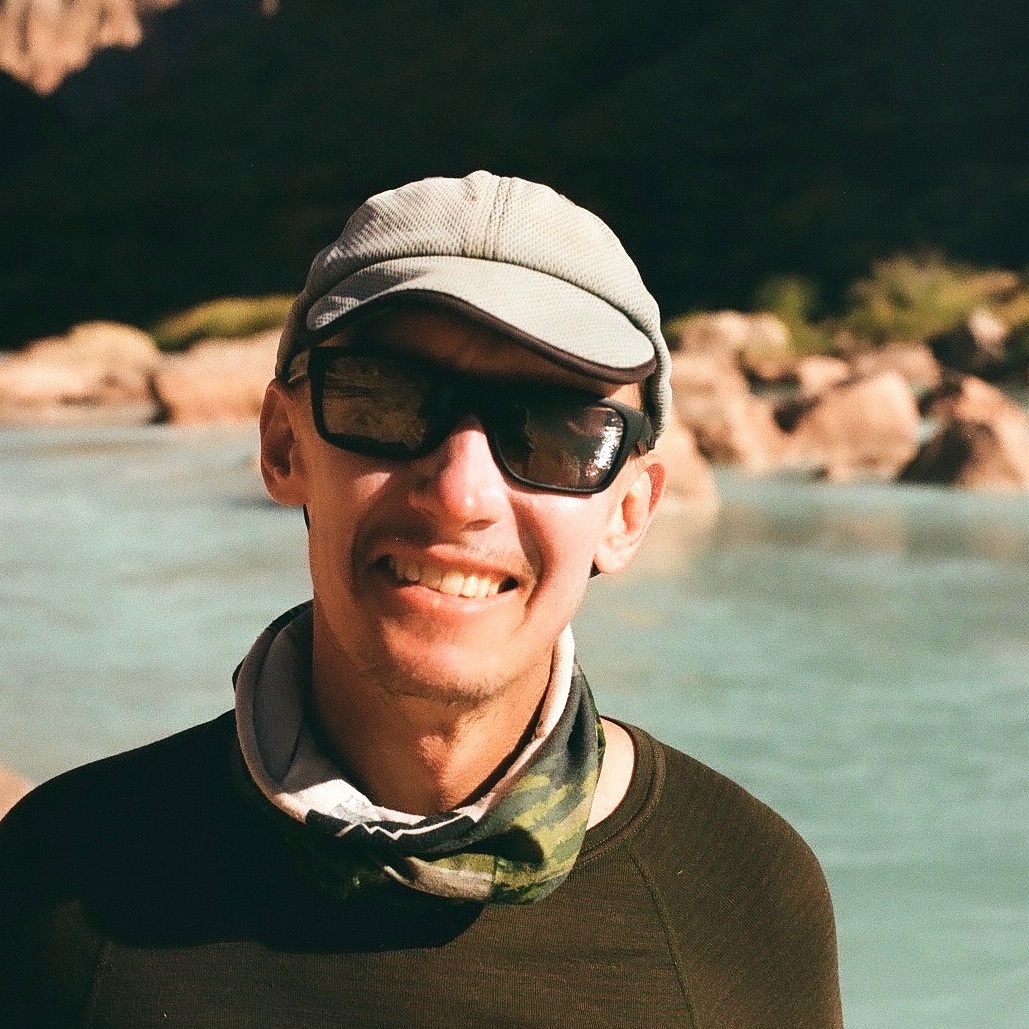 Steffan was born and raised on Colorado’s Front Range. Coming from a background of distance running, cycling, skiing, and ice hockey, his interests align closely with the promotion, development, and support of getting people with disabilities involved and active in recreational opportunities. He has worked on private land conservation and conservation easements in northwest Wyoming since 2007. Prior to joining the Board, Steffan was a client and volunteer for Teton Adaptive Sports. 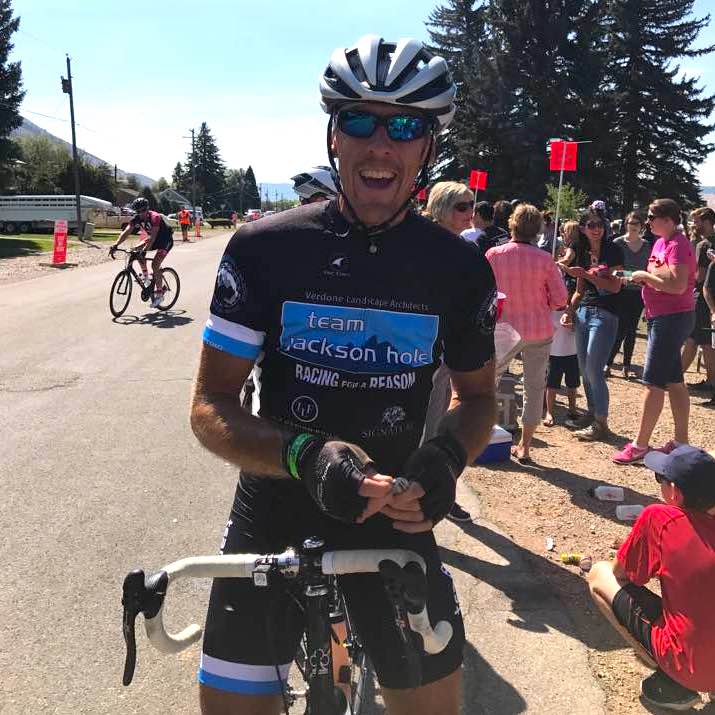 Kevin Burke was born and raised in New Hampshire, although he has been in Jackson Hole since 1991. Both of his folks were born and raised in Idaho, so he found an early affinity for the West at a very early age during visits to see his grandparents every summer.

His wife Carolyn and he are working on their 28th year of marital bliss together and have one son, Brendan, who has taken advantage of TAS for what seems like at least a decade. He’s been, and still is, an active participant in Special Olympics since the age of eight and Jackson Hole Therapeutic Riding prior to that. The last few years he’s begun to give back as well in the capacity of a volunteer with JHTRA and, just this winter, TAS–the student has become the teacher in a sense and he loves it. Carolyn and Kevin both continue to volunteer with Special Olympics in varying capacities, with his time being primarily around Brendan’s involvement as an athlete and helping at venues, races, etc.
Kevin loves the Jackson environment and can usually be found on a pair of skis or varying types of bicycles depending on time of year and what the weather is doing outside. He also loves to travel and typically have one decent overseas trip a year to cycle and check out other mountain towns.

Kevin has completed board membership duties on both JHTRA and Pathways Taskforce, where he served two three-year terms. Kevin is also a principal at Carney Logan Burke Architect and Design. 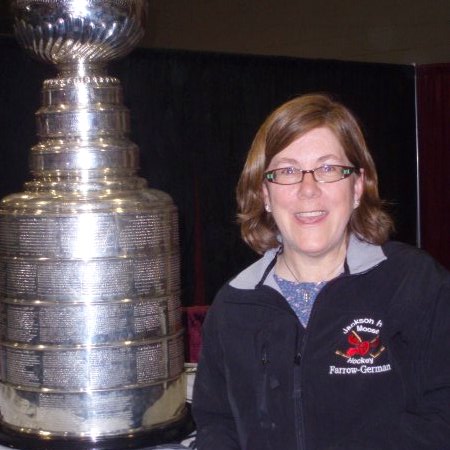 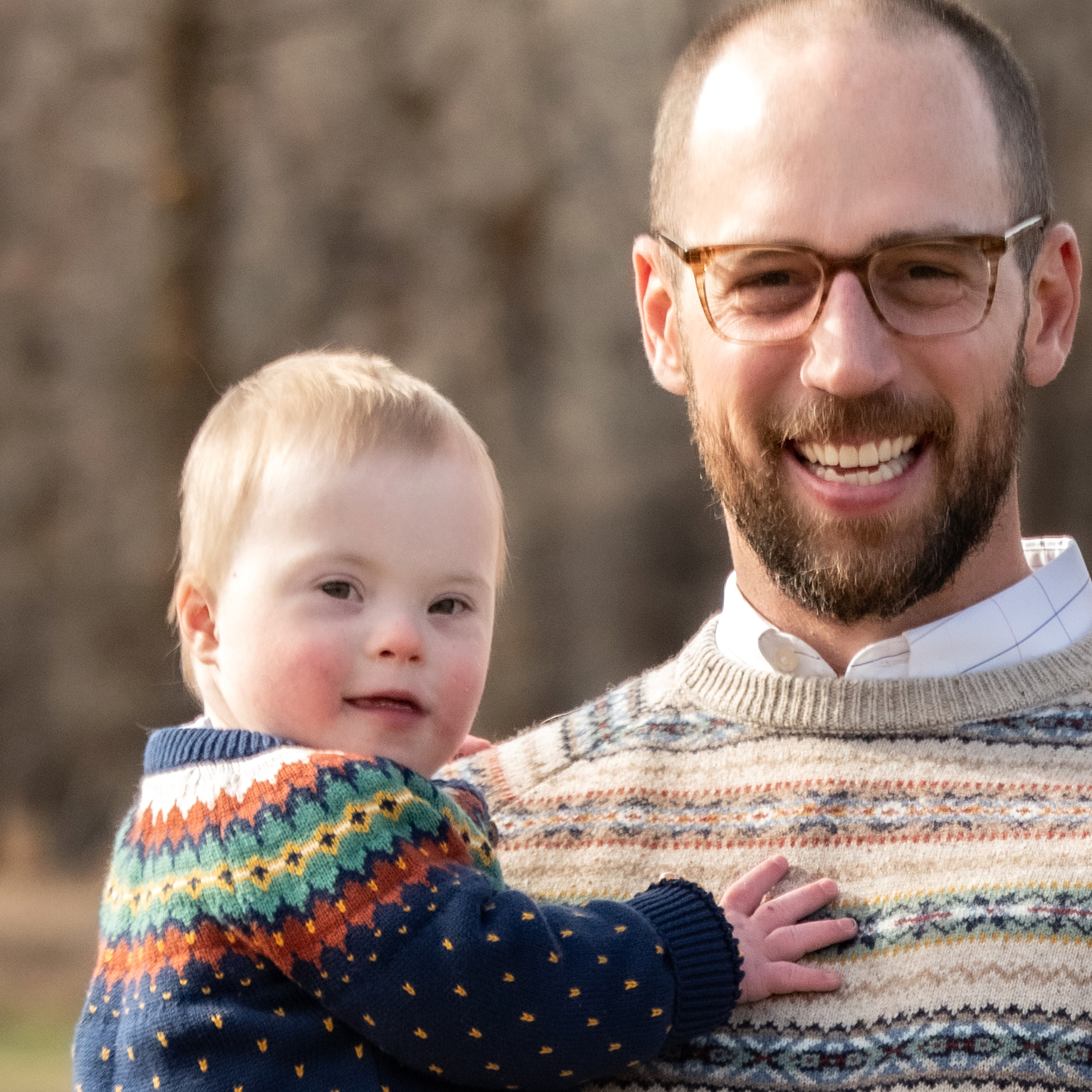 Mike Fry first experienced Jackson while on honeymoon with his wife, Kathryn. They were both immediately drawn to the mountain lifestyle and within two years transplanted their east coast roots. They now have three amazing children, the youngest of whom has Down Syndrome.

Mike has always loved team sports and the outdoors. He is excited to share TAS’s mission to promote inclusion and equal access so people of all abilities can experience all the amazing opportunities this valley has to offer. 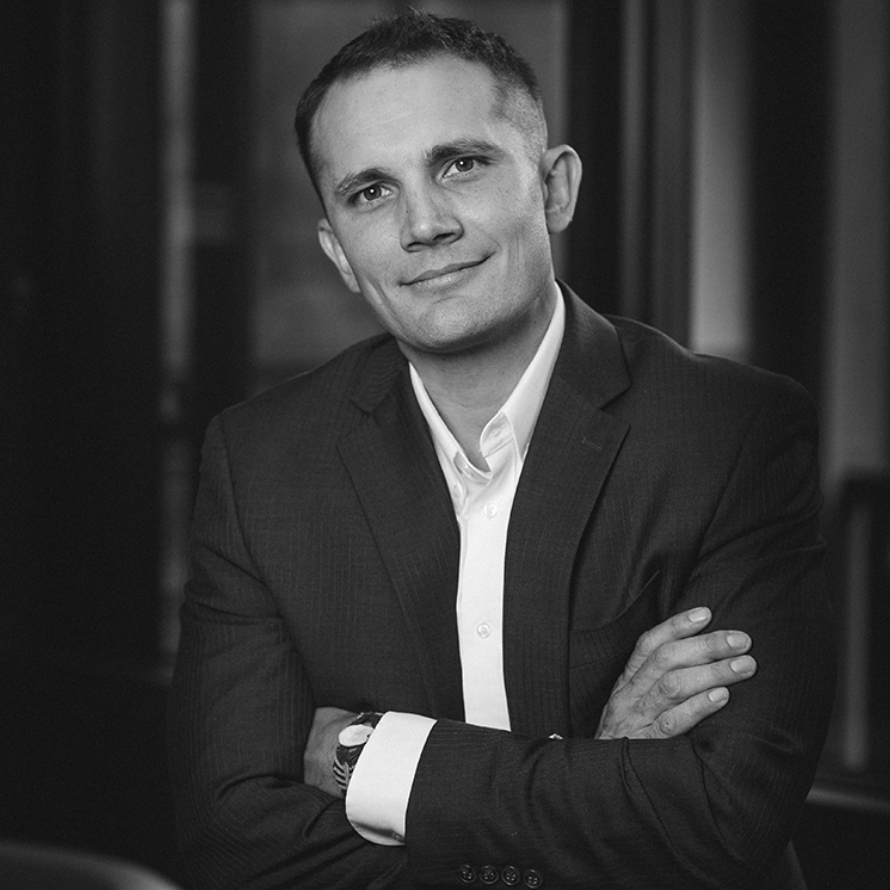 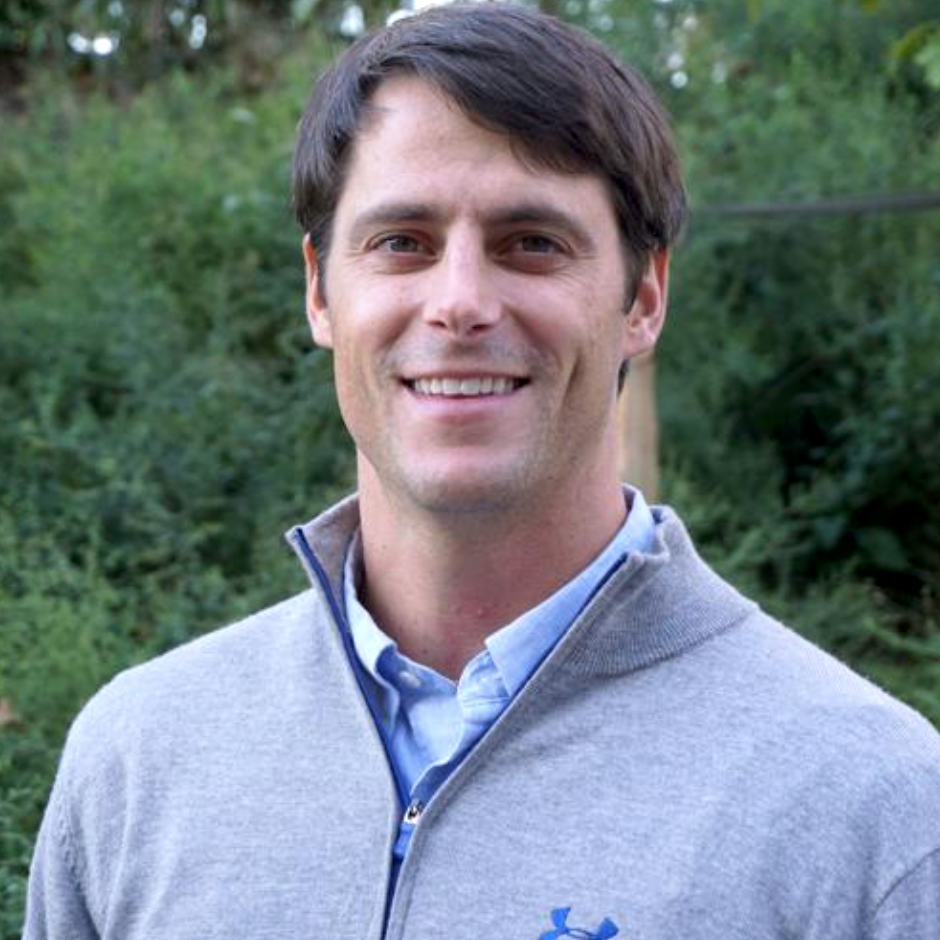 The TAS mission is close to my heart. My oldest brother has Down syndrome and lives in Whitefish, MT with my mom and has benefited from Dream Adaptive Sports in that community. Ori and I lived in Bozeman for a year and got involved with Eagle Mount there, and the folks who were like our Bozeman Family were very active Board Members at Eagle Mount. We did swimming on Saturdays with a young Down Syndrome boy who was the coolest kid ever, and then I skied on Sunday with a young guy who had an accident off a ladder, which paralyzed him, and he was learning to sit ski. I’ll never forget the last day of the year he had gotten to the point where he was good enough to go off the top lift and it was 8″ of fresh powder and I was skiing behind him (still tethered) and he was getting face shots and snow billowing over his sit-ski and hootin’ and hollerin’ the whole way down. One of the most rewarding moments of my life.

Dave is the executive director of the Jackson Hole Lacrosse Club. 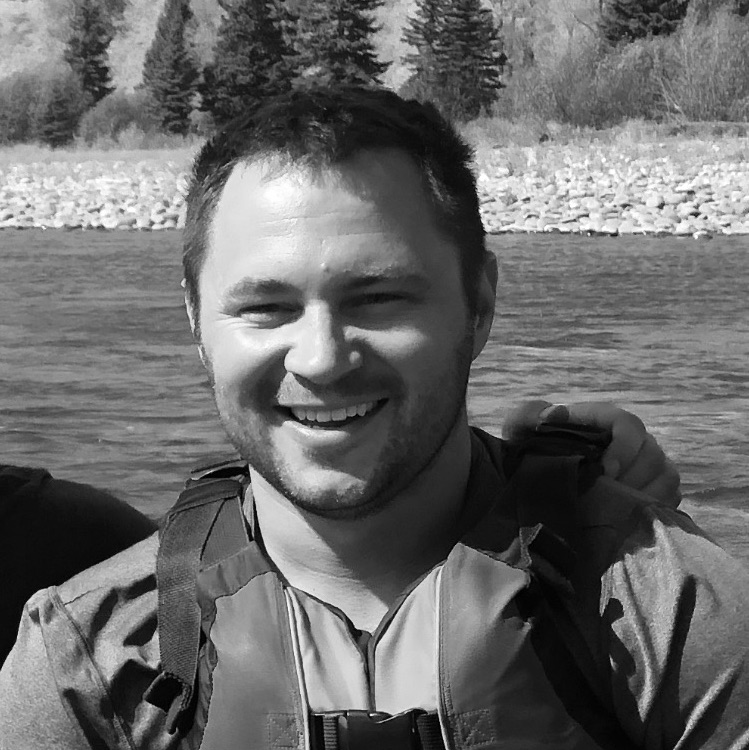 Ryan McDonald is a Jackson native and joined the board in the fall of 2018. He is passionate about equal opportunity to outdoor recreation for people of varying physical and mental abilities. Ryan first worked with TAS at Sled Hockey Sundays in 2016 and has had a vested interest in the organization’s efforts ever since.

As a veteran of the U.S. Army he is extremely interested in finding ways to partner with veteran focused organizations to ensure our heroes living with ability challenges are incorporated in TAS programming. 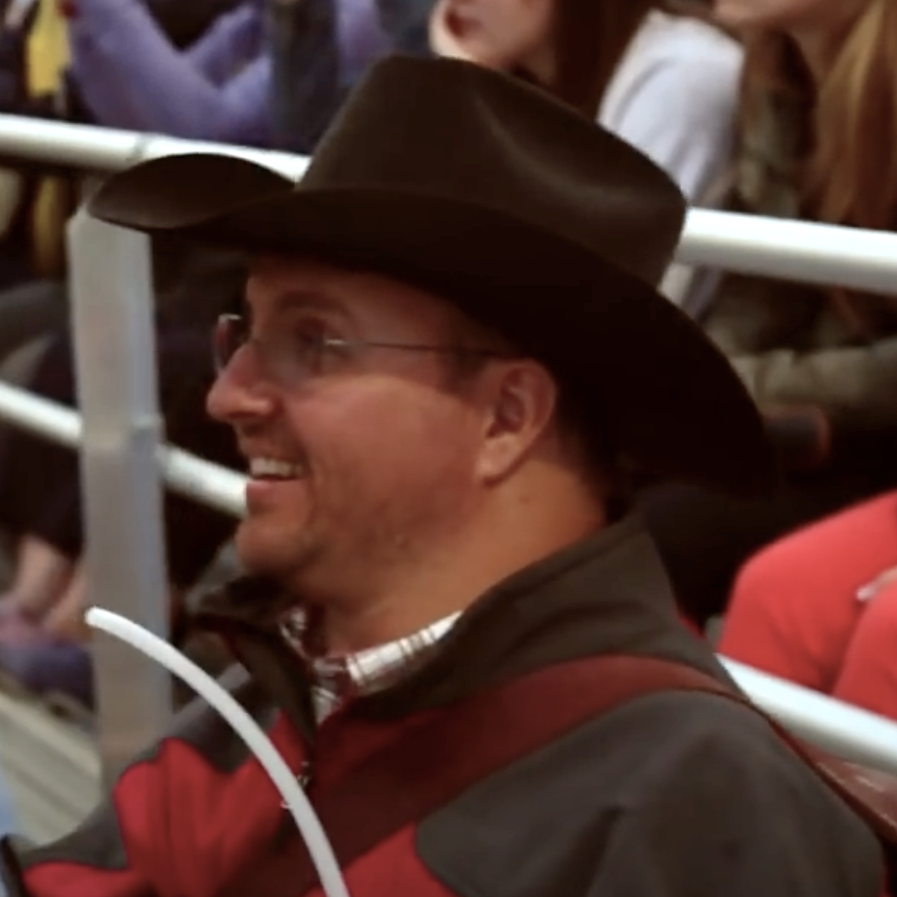 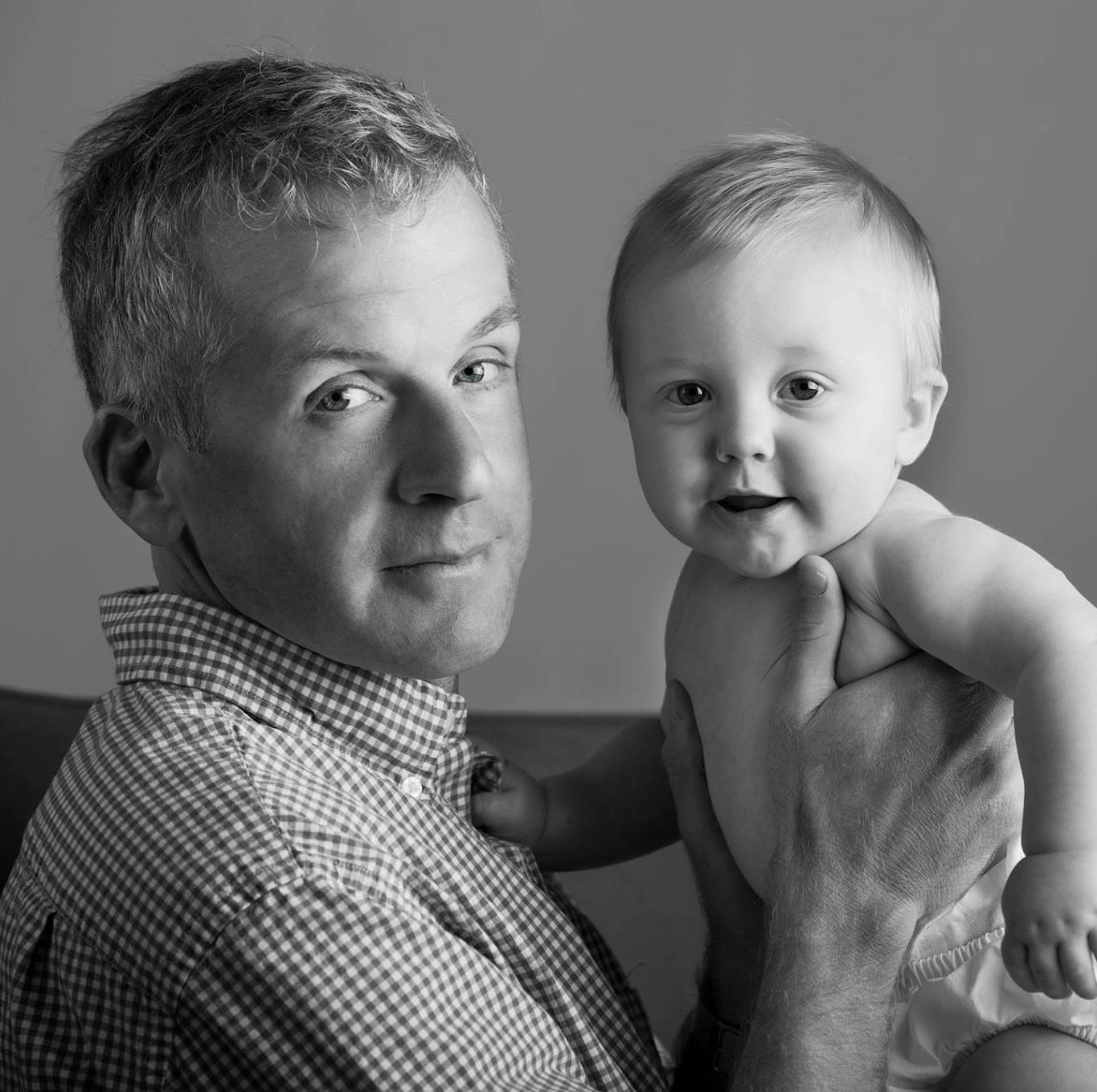 Jeff Moll is a lawyer in Jackson Hole, who likes to spend his free time skiing, climbing, playing hockey, and raising his son, Max, with his wife Margaret. 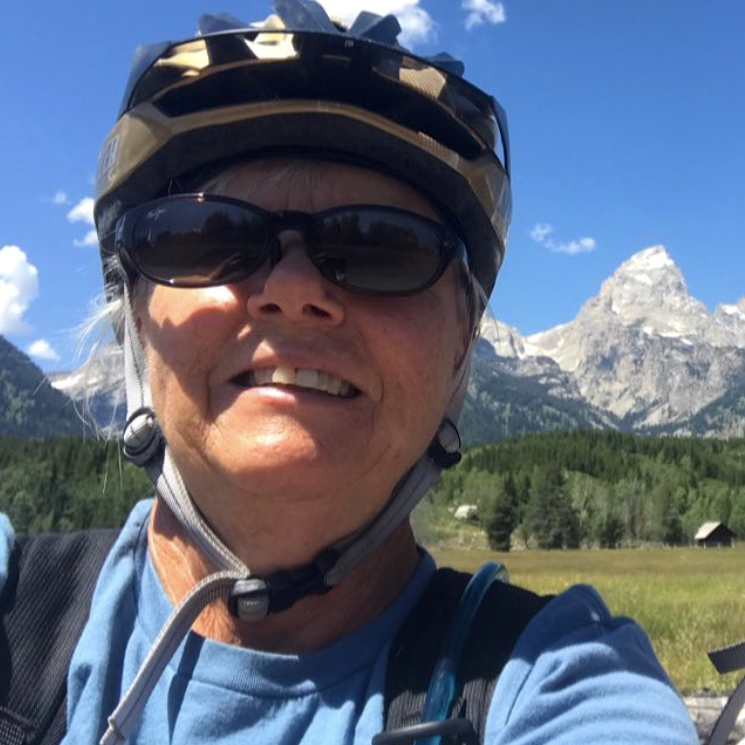 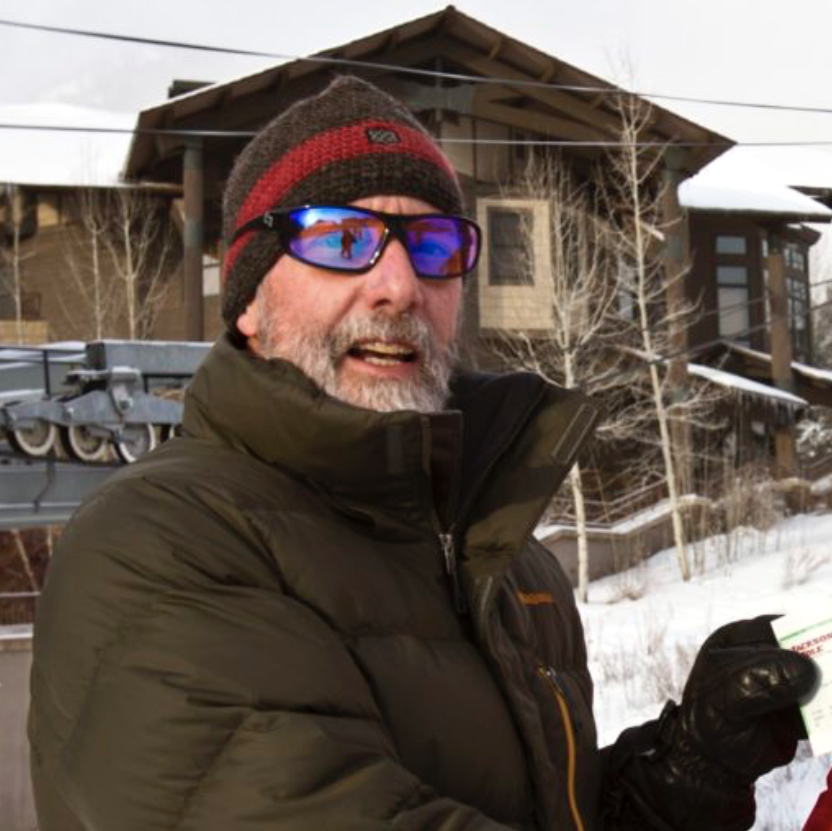 Kurt Henry moved to Jackson as a young man to ski, climb, and run in the Tetons. He stayed in Jackson to raise his family and pursue his calling to help young people with odds stacked against them.

Kurt spent his career counseling at risk youth, teaching people with disabilities to ski, and advocating for accessibility and quality of life for the people he worked with. In 2017, he retired from the executive director position but remains a key volunteer, advisor, and advocate for TAS and the families that TAS serves. 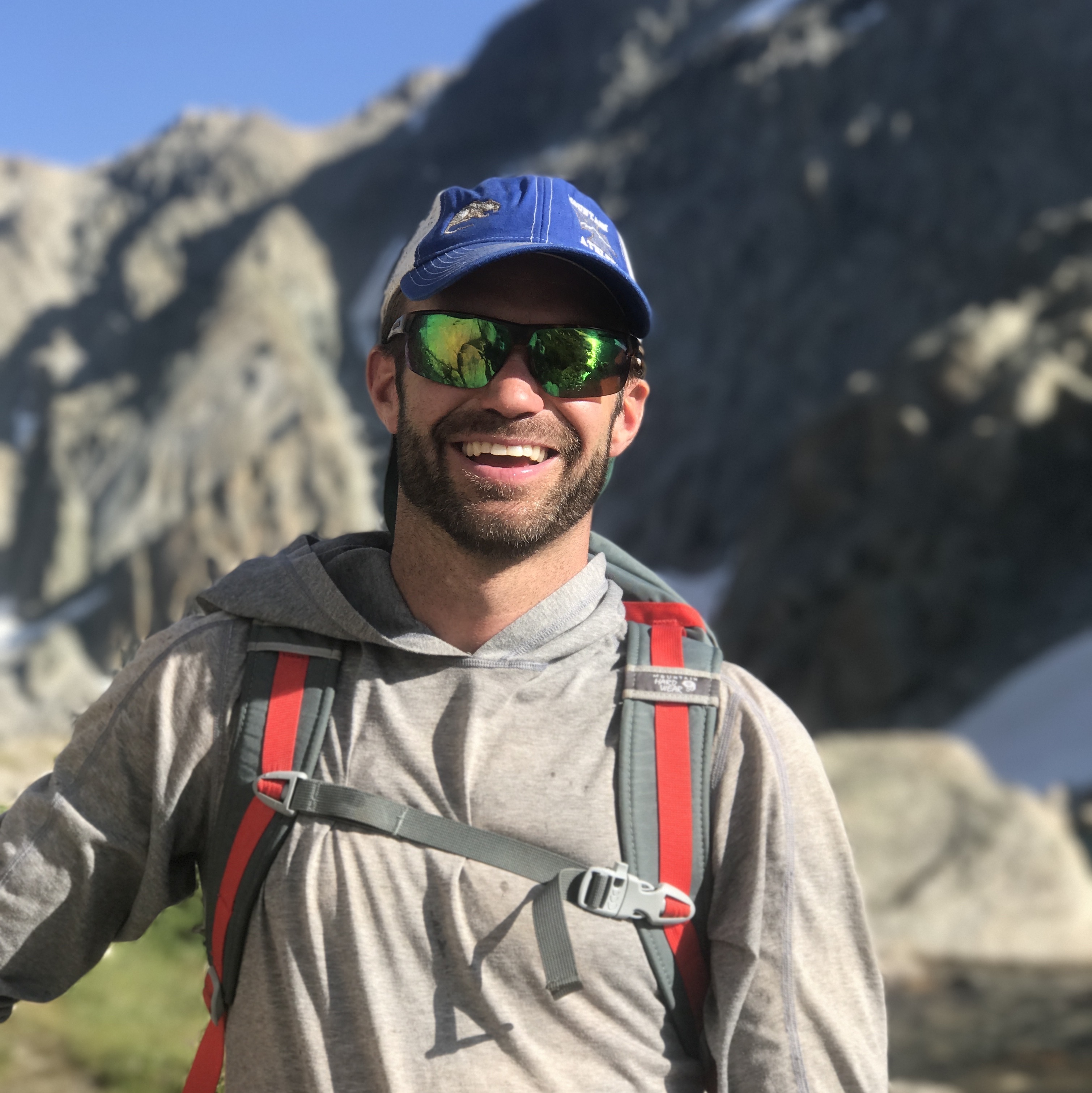 Ryan Burke is an endurance mountaineer and addictions counselor who has lived in Jackson for the past 13 years.  His history with Teton Adaptive Sports spans back to 2004 when he signed on as an adaptive ski instructor, moving on to become the summer and winter program manager in 2008.

Ryan along with Kurt Henry started our summer program and worked to make sure all athletes with disabilities in the valley got a chance to explore our backyard. In 2012 Ryan helped guide blind climber Nancy Stevens to the top of the Grand Teton and in summer 2017 help one-armed athlete Lucus Onan complete the “Picnic triathlon” in Grand Teton National Park. 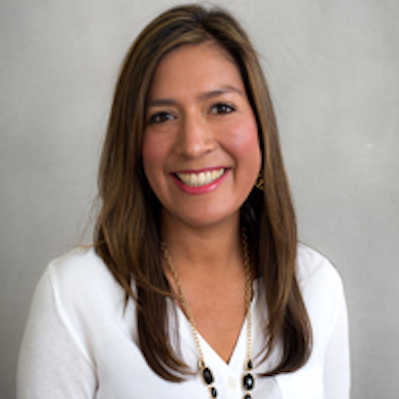 Originally from Watsonville, California, Liz Acosta McCune moved to the valley more than ten years ago and has been a longtime advocate for the disabled community. Liz, along with a group of women pioneered the first non-profit in Teton Valley, Idaho for disabled individuals and their families. She is a Business Consultant for Silver Star Communications, a wife and a mother of three children. Her family is incredibly active in the community and the great outdoors. She has been involved with TAS community as the mother of an adorable adaptive athlete named Maleah. As a volunteer, she envisioned the TAS Sled Hockey program and worked to get it started at the Snow King Events Center! She brings business savvy, a journalism background and fundraising skills to TAS.

Our mission is to promote, support and develop outdoor sports and recreation opportunities for people with disabilities living in and visiting the Greater Teton Area.